Menu
How the idea was born

We want to inspire to implement sustainability in daily life, by showing what is possible. We do this by traveling all-electric and visiting other sustainable initiatives to learn from.

Why are we going to Africa all-electric?

Climate change is a hot topic.

Traveling both for business and pleasure is changing.
The world is running out of fossil fuels; the most used source for traveling during the last 200 years.

Using fossil fuels for traveling generates a lot of CO2 emissions. The shortage, as well as the pollution, are reasons to look for alternatives. 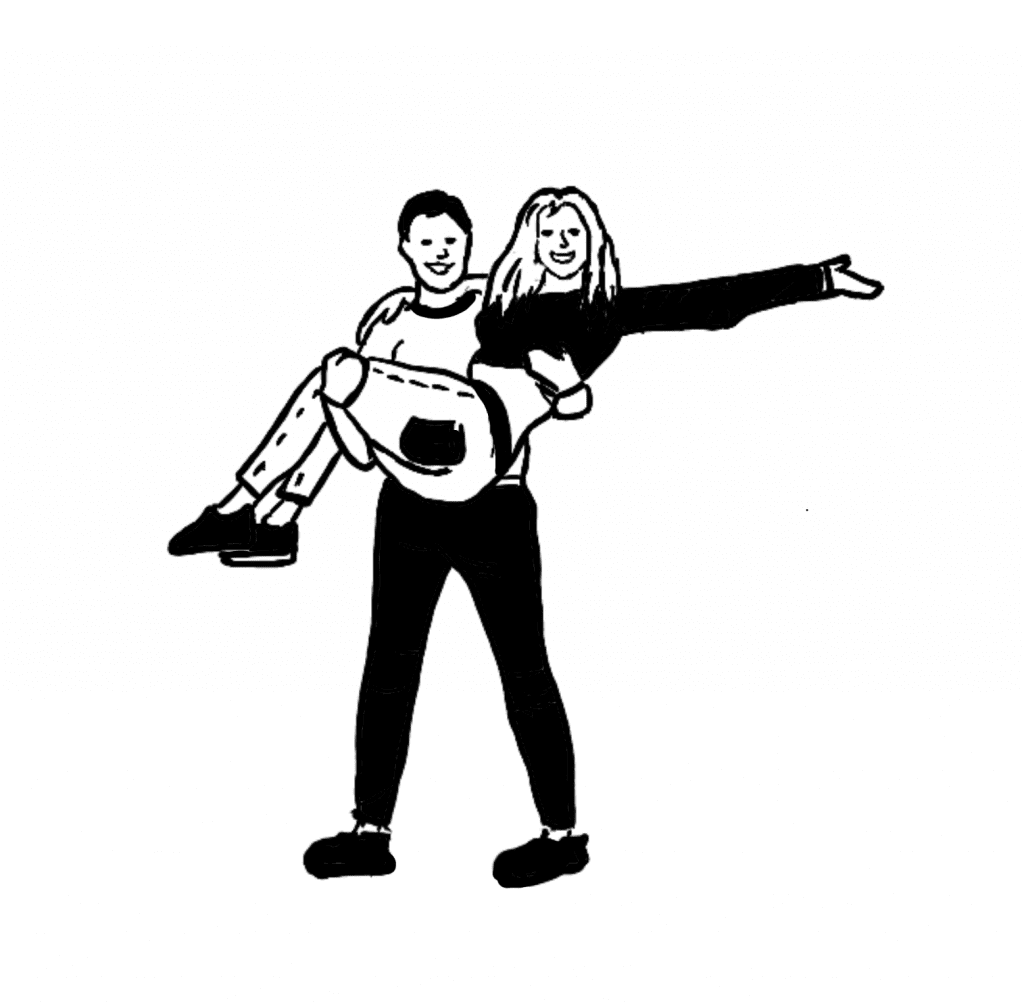 A world premiere in the travel industry

Something that is never done before, but we believe WE can.

We, Maarten van Pel & Renske Cox, want to show the world what is possible driving an electric car for long distances in extreme circumstances and through countries where electric cars and charging stations are not implemented yet.

To do this we will charge the car with solar panels we take with us. 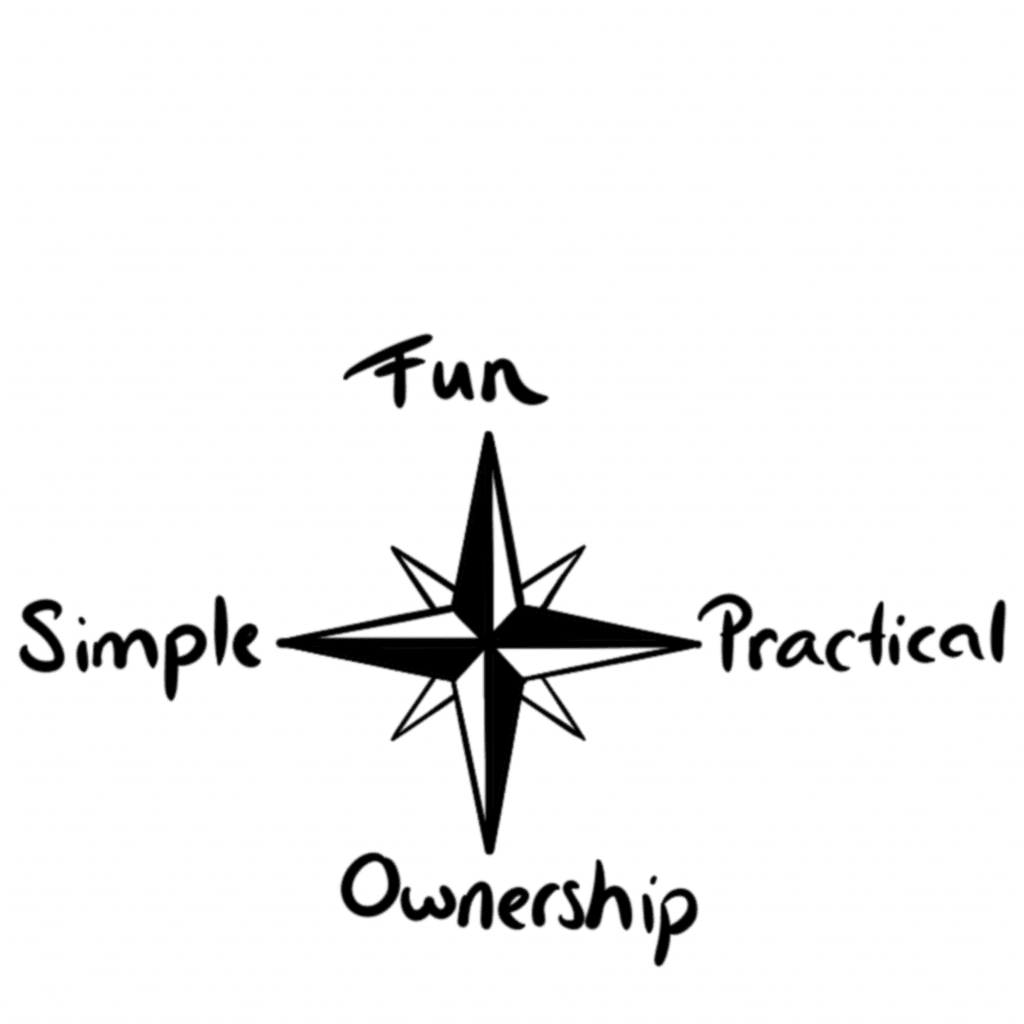 Electric cars are an alternative

The electric car has a lot of potential. However, the user will have to adapt.

1. It is no longer possible to fuel up in just 5 minutes
2. Fewer kilometers can be driven without a stop.

More and more people are switching to electric, however a lot of them rent a fossil fuel car for long distances traveling. 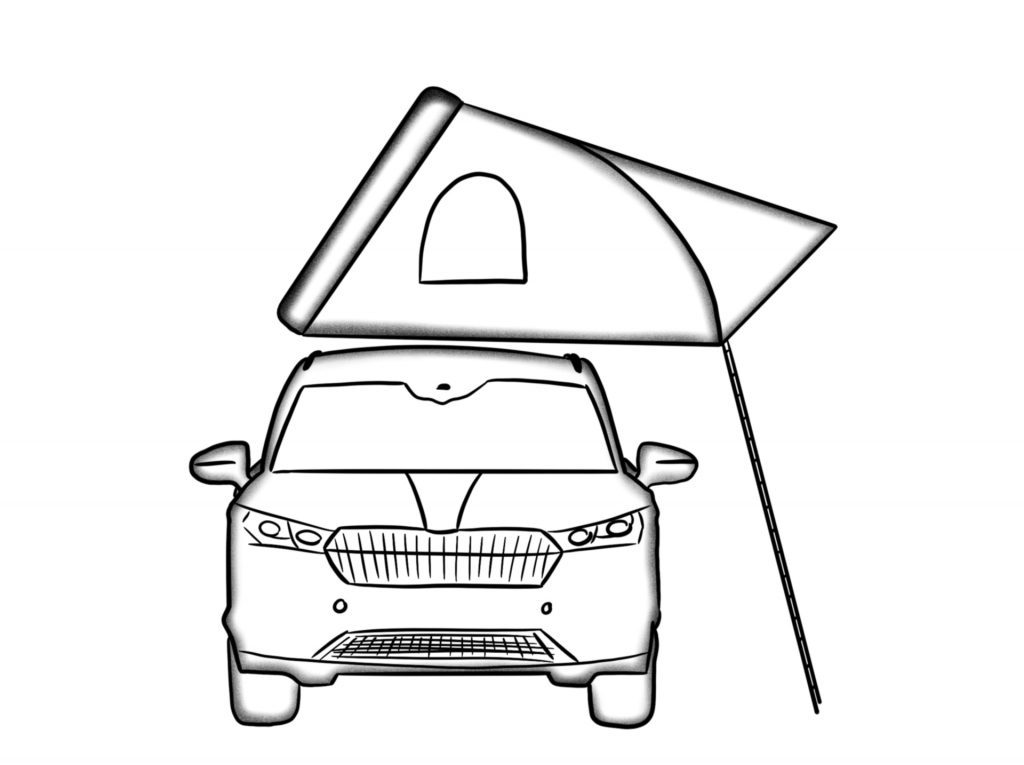 While driving long-distance in an electric car, we will visit all kinds of projects that contribute to these four Sustainable Development Goals (SDG’s):

We will multiply the four SDG’s above by:

4 SDG’s x 4 ways to implement them. That is how 4x4electric was born as NGO.

We will share what we learn to inspire on what else could be done at home and at work.

Our goals as NGO

Find a way to make sustainable energy accessible off-grid as a mobile package.

At least 51% of our kilometers in Africa will be driven on electricity charged with our mobile charging package.

Drive through 30+ countries, of which many countries have no charging stations, and charge the car with our off-grid mobile charging package.

Gaining the trust of, and inspiring our followers, companies, and investors on what is possible in making our lives more sustainable.

Reach a public of more than 10 million people international.

Share our story on at least 20 different events in Europe and/or Africa.

Offer companies an opportunity to test new techniques that contribute to sustainable mobility. Our collected data and our learnings will be shared with the public.

Invite followers and partners at least 3 times when we are testing our off-grid mobile charging package.

Present our car and mobile charging package on at least 10 different events in Europe and/or Africa.

Inviting schools and universities to participate in our project to learn together with us.

At least 1.000 students will work on our project with us.

Share our story on at least 10 schools or universities.

Support the people/projects we visit by providing our network, knowledge, electricity from our car, and more.

Visit 52 people/projects on route that contribute to sustainability and share what we learn from them with our followers.

Provide electricity with our mobile charging package to at least 15 projects.

At least 30 new connections will be made between people, projects and companies helping them become more sustainable.

Want to know more? Follow us on social media​

December 2019
The start
Trip to Namibia and Botswana

We flew to South Africa and drove with a jeep through Namibia and Botswana. We fell in love with the continent but also realized what +0.5degree could do to this nature. We decided our flight back home would be the last one, and do what we can to live sustainably. 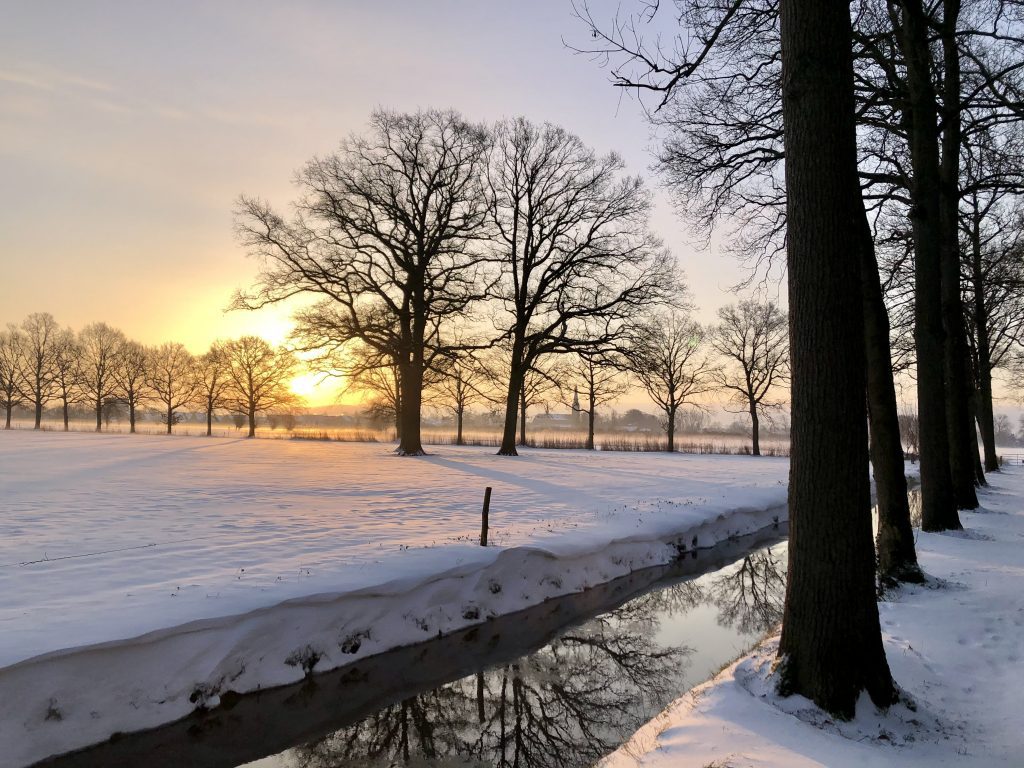 Looking back at our trip through Africa, we started thinking of a sustainable way to travel there once again.
July 2021
Travelling with the Tesla 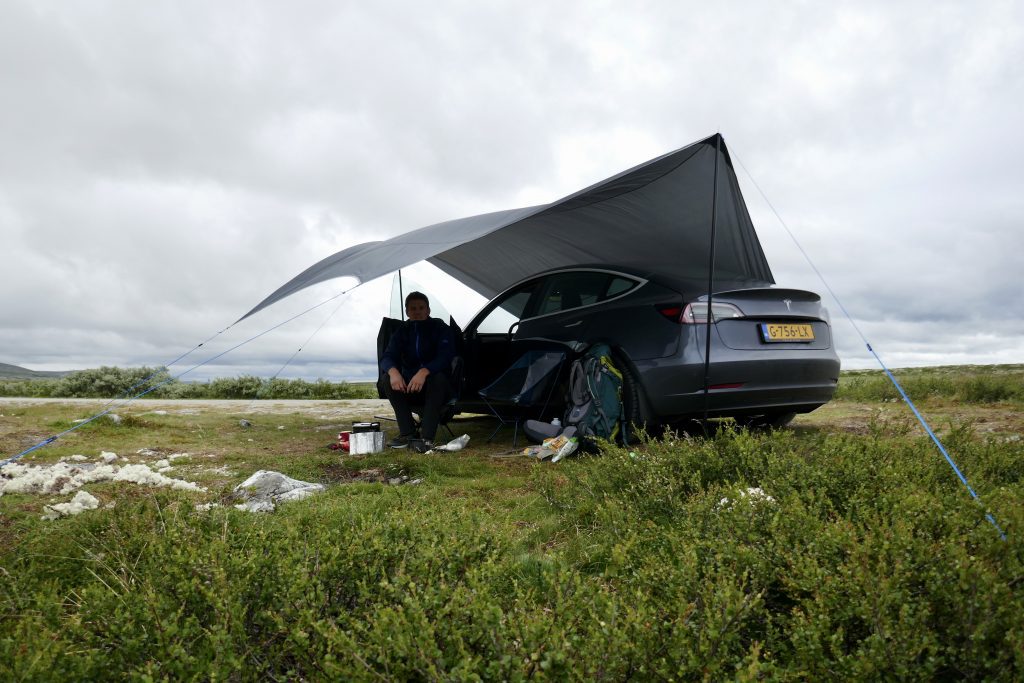 We built a bed in our Tesla model 3 and traveled through Scandinavia to experience what it would be like traveling all-electric. 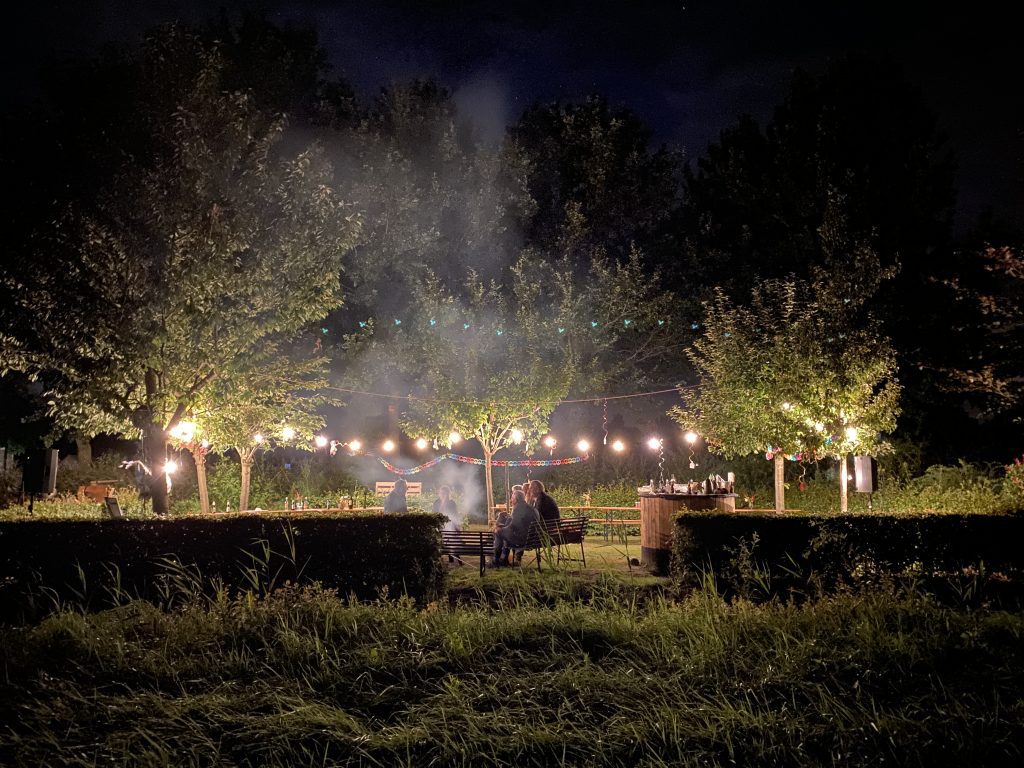 We organized a party in our garden for friends and family. This is when we shared our idea for the first time; to travel long distance all-electric, charging with solar panels we would take with us.

The reactions we received were so positive that we decided to give it a try and see how far we would come.

October 2021
Reaching out to potential partners 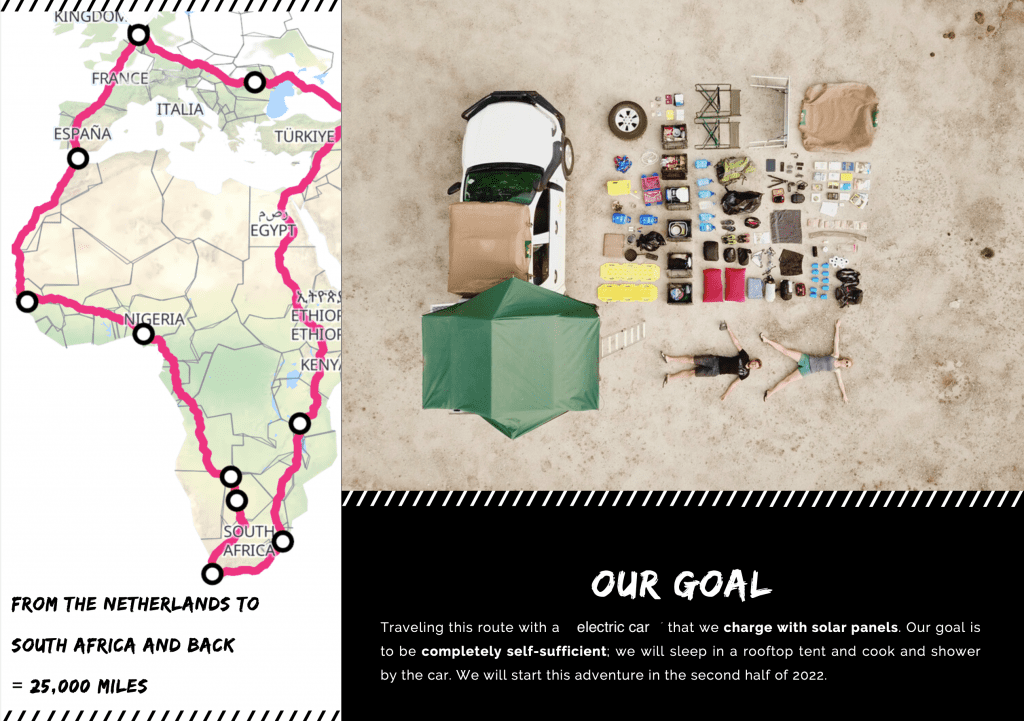 We started an Instagram account to share our experiences while organizing this expedition, as we realized these preparations were an adventure by itself.
This month we made an overview of all the expected costs, partner packages, and a flyer to share with companies. The next step: calling potential partners.
December 2021
The first version of the website went live!

Our first version of our website was live, as well as our promo video.
We had a lot of (video)calls with companies to share our idea. Without exaggerating, we have spoken to more than 250 companies in total (up to July 2022). December 2021 we only received 'no' as an answer. Challenging times.
We came to the conclusion that by listening carefully to the feedback we received, we could improve our pitch and concept.
January 2022
ZUYD Hogeschool became partner of the expedition 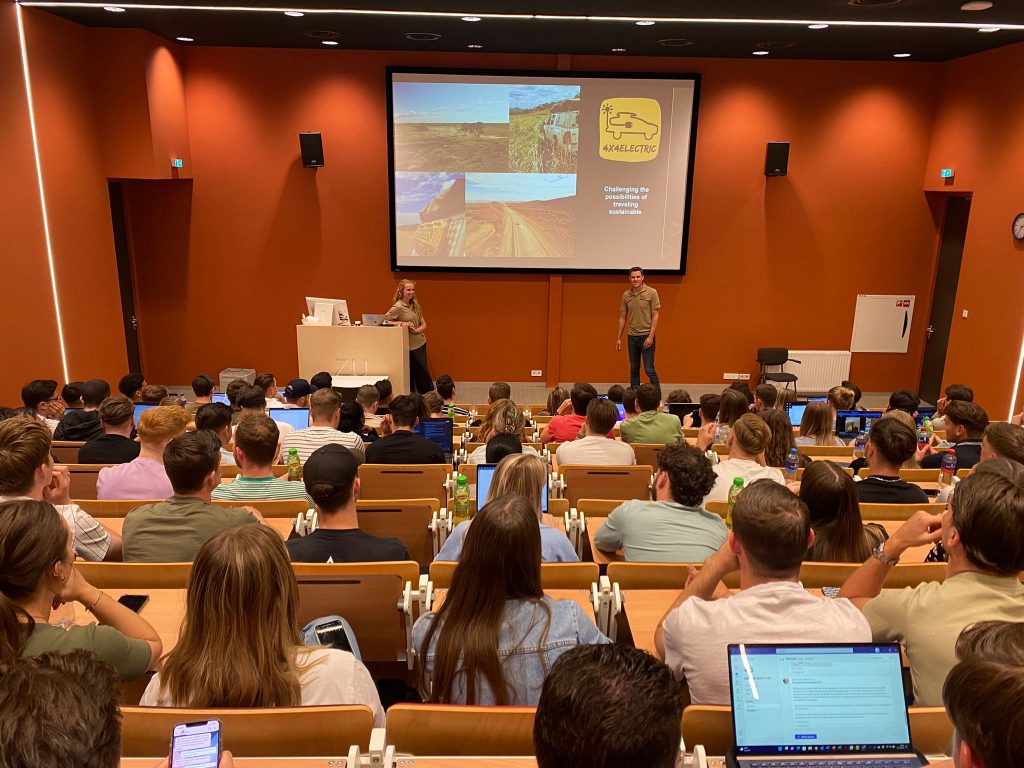 Students started helping us with challenges, such as:
February 2022
We found media partners 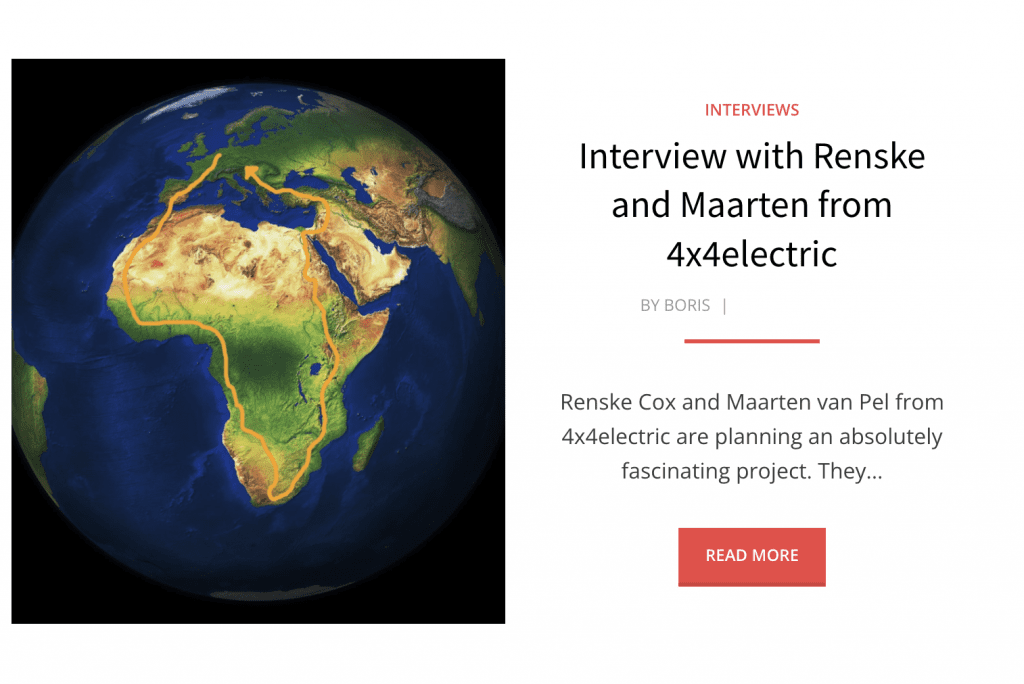 We found some media partners, to help us reach more people.
Up until now we still did not receive a 'yes' from a product or financial partner. Sometimes we had come so far, and still they said 'no'. But we felt the potential of a 'yes', we kept believing!
March 2022
We shared the expedition on LinkedIn 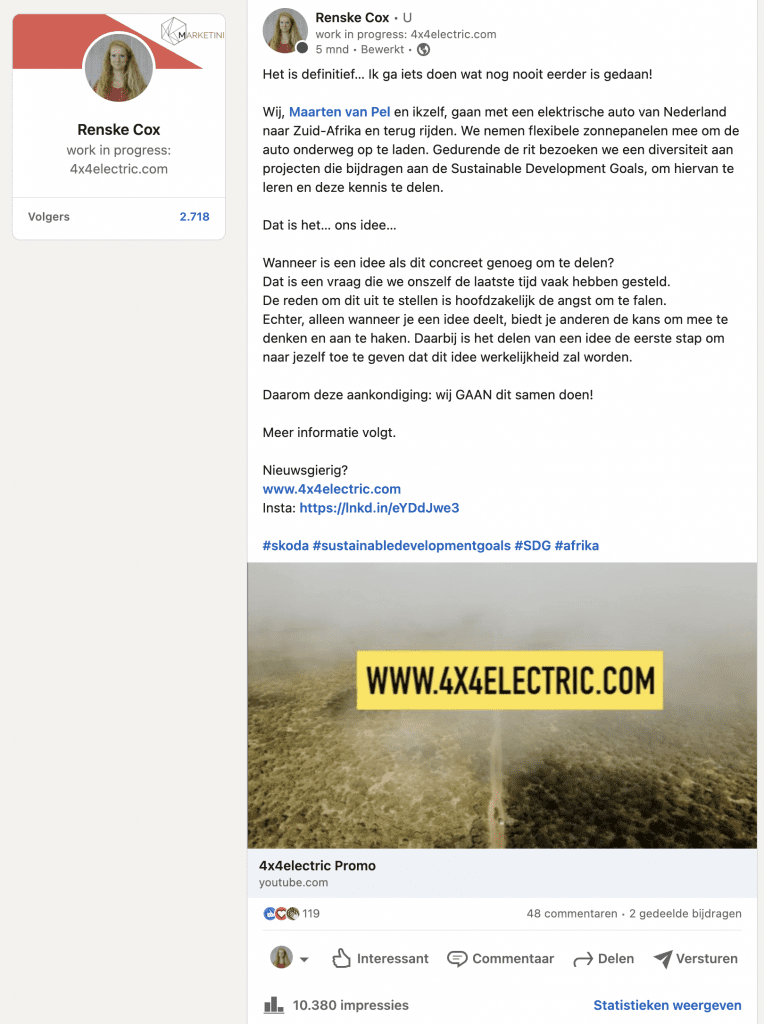 A big step for us! Because if we would not succeed, it would feel like a big failure to ourselves. By doing so we noticed it gave us much more energy to keep going!
On the 15th of march, we received our first 'YES'! Campwerk became a partner; they offered a rooftop tent to use during the expedition.
April 2022
We financed the car for the expedition ourselves 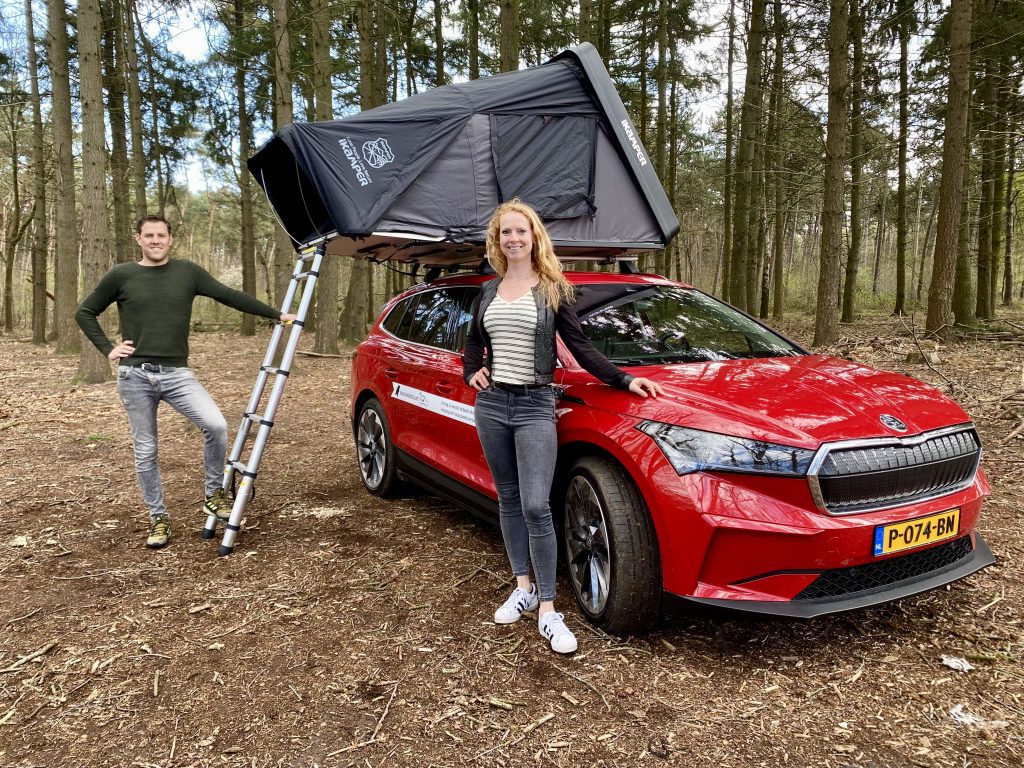 At this moment we were in contact with car manufacturers for about 5 months. We decided to finance the car ourselves, to speed up the process. On the 10th of April, we drove to the north of the Netherlands to pick up to the car and the rooftop tent for the expedition. This helped as lot, as now our expedition was not only a story, we could present the car and tent!
This month Renske gave a TEDxTalk in Roermond about the expedition.
In addition, we made a new promo video with our car.
May 2022
The NGO for the expedition was founded! 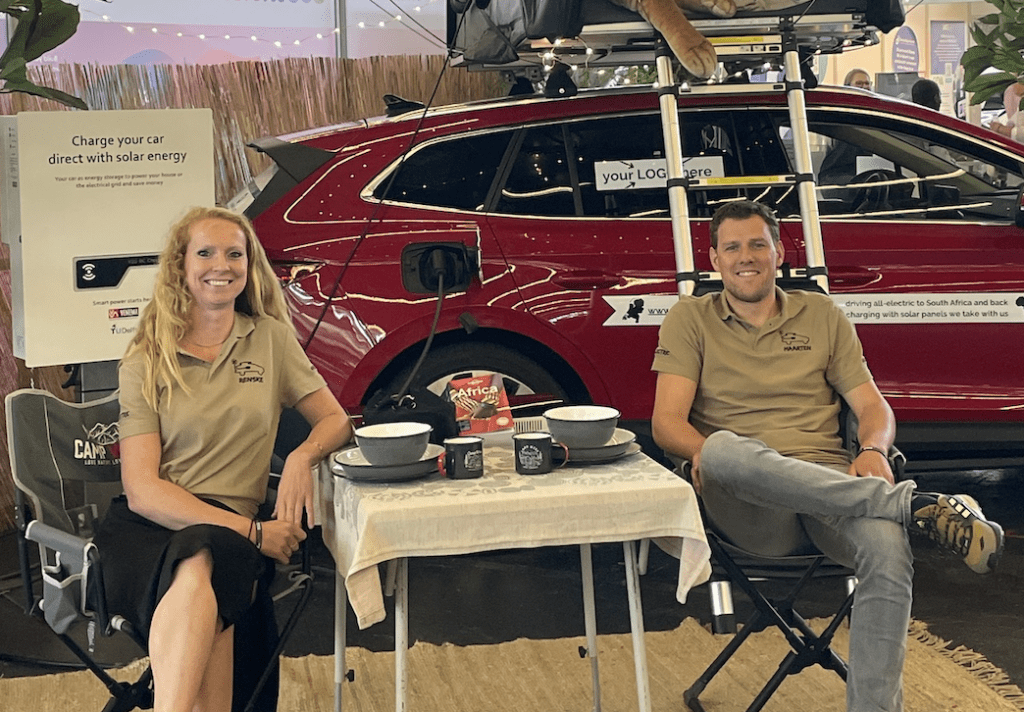 On the first of May we sent out our first press release. This resulted in many publications including in the newspaper and in 'De Kampioen', the biggest magazine in the Netherlands.
We presented the expedition on the exhibition Fully Charged at the RAI in Amsterdam. It was so cool to see how random people we did not know reacted to our idea.
Before the end of this month, we found our main partner; Geelen Counterflow! We were so happy... And it was so hard to not share this with everybody. But we wanted to make a BIG moment out of it!
June 2022
We chose the solar panels for the expedition 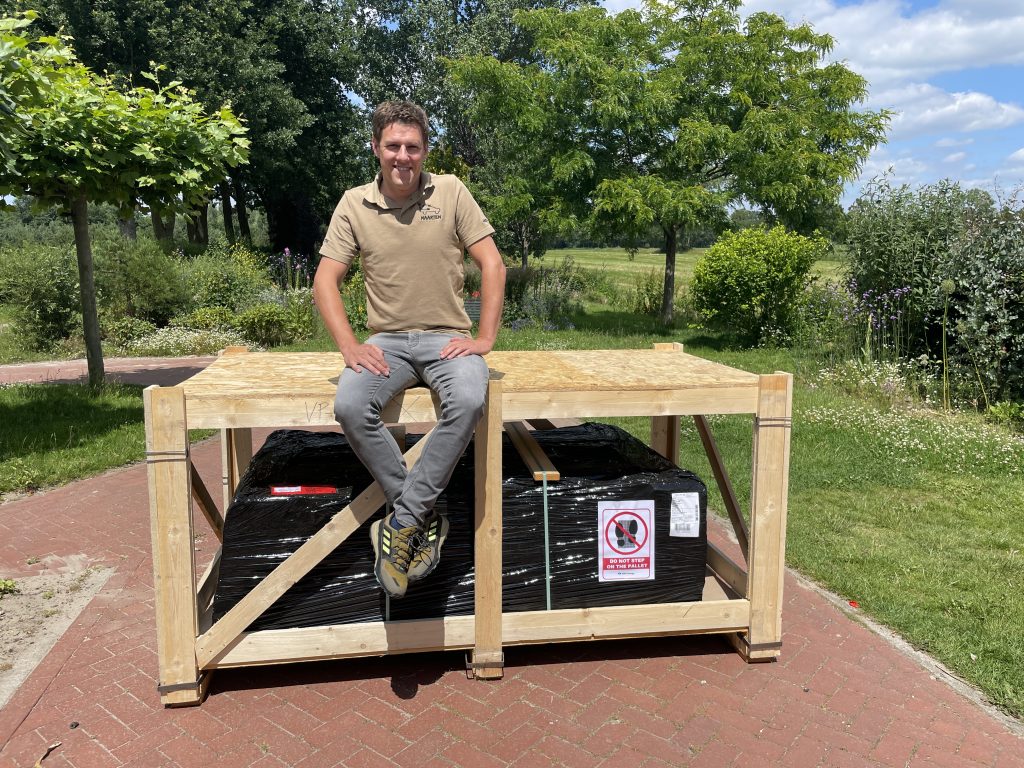 We bought the solar panels for the expedition.

We presented at the second exhibition: Huis&Energie

At this moment the students of ZUYD were still working on the data dashboard. We contacted Itility, which resulted in a new partnership. They now take the lead in building and maintaining the dashboard. 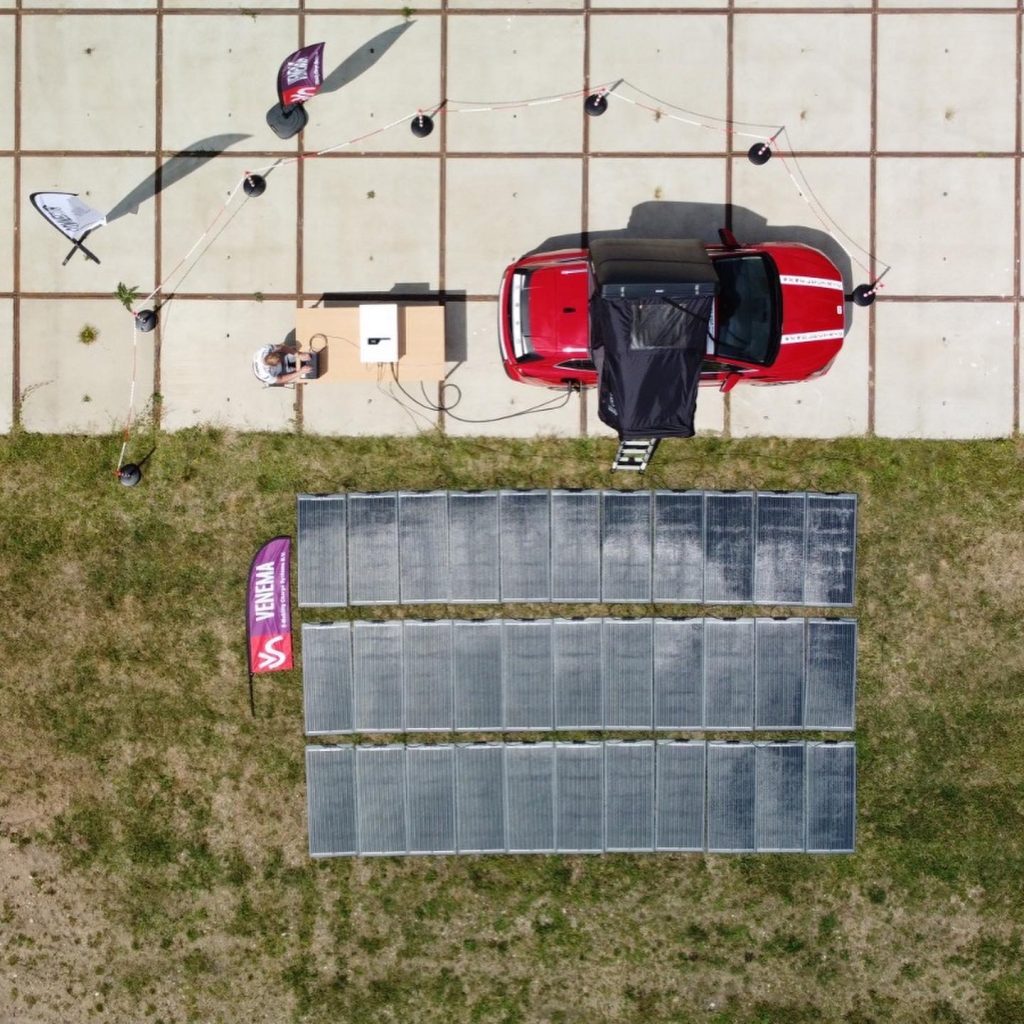 The first day of testing the charging technique with Venema E-mobility. It worked!
We also started preparing the inside of the car, removing all we could miss.
On the 18th of July, the car and main partner were revealed to the press.
Behind the scene, we started working on a new improved website.
August 2022
Preparing the expedition car 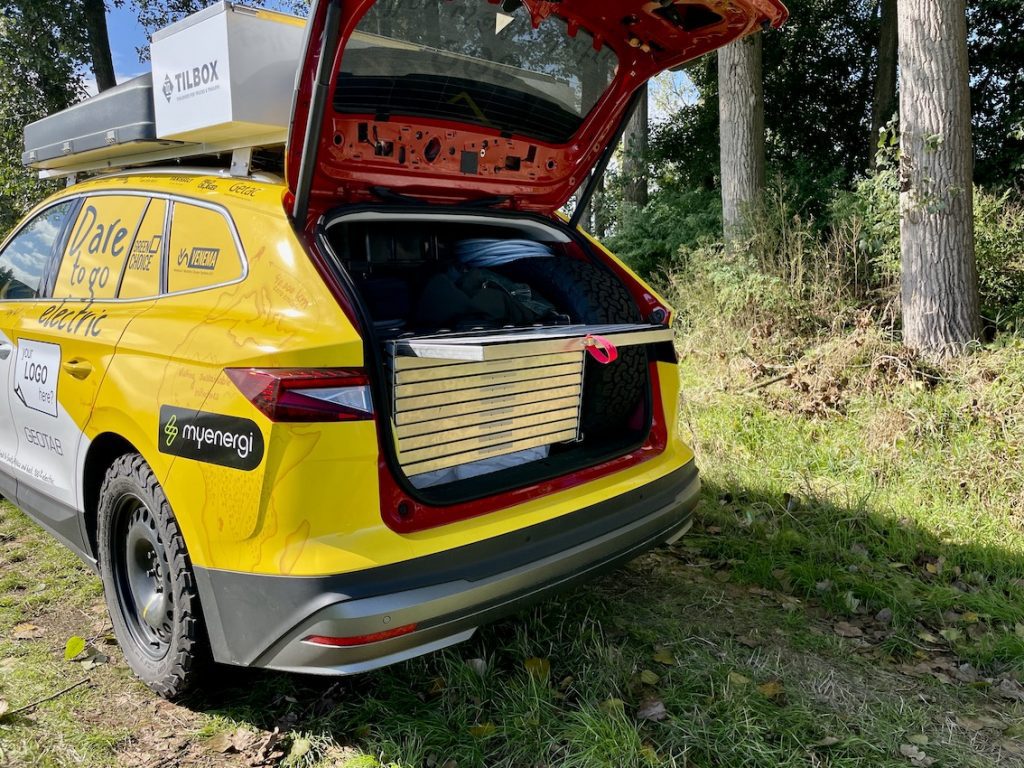 With the new look of the car, all our communication was updated as well.

In addition, we worked hard on the preparations of the inside and outside of the car. The system was made and installed to store the 60 solar panels in the car, as well as a fridge, an extra battery and an extra rooftop box. The system to charge the car was finalized. 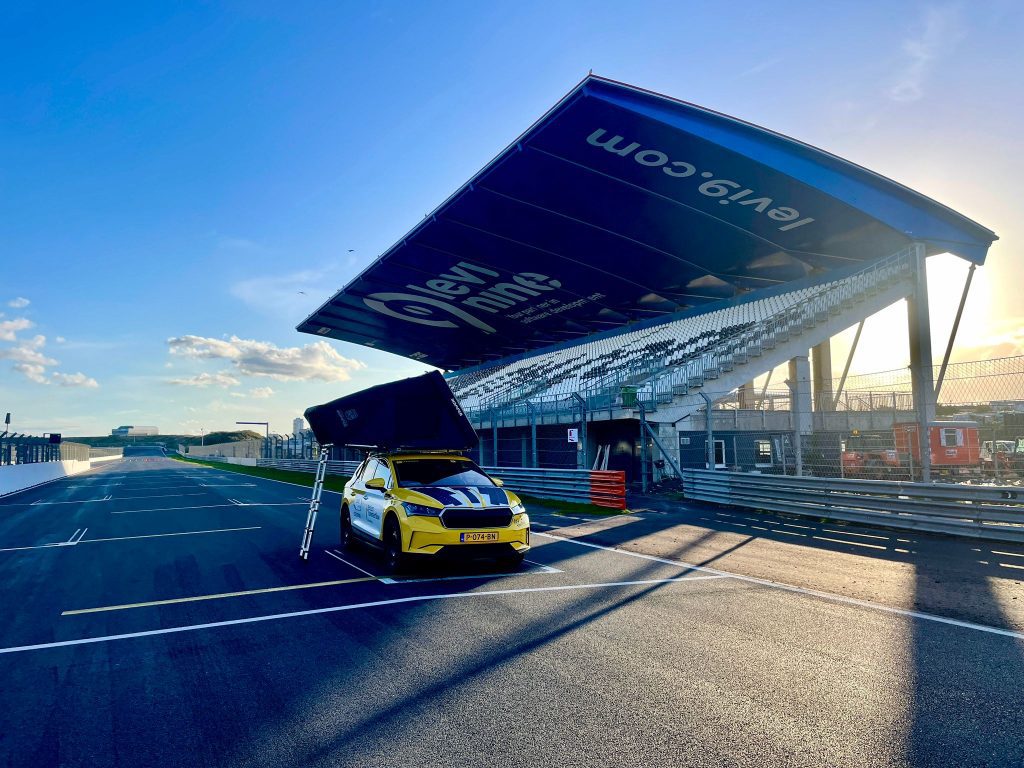 Customized solar panels were installed on the frunk, rooftop tent and rooftop box. These panels charge the 12V battery of the car to provide the airconditioning, our fridge and for cooking.

In addition, the ground-clearance of the car was increased by replacing the springs.

And last but not least, we started our pre-expedition. We visited many unique locations such as Circuit Zandvoort, we met Jan Terlouw and we tested our solar charging technique. It worked!
October 2022
Last month before departure! 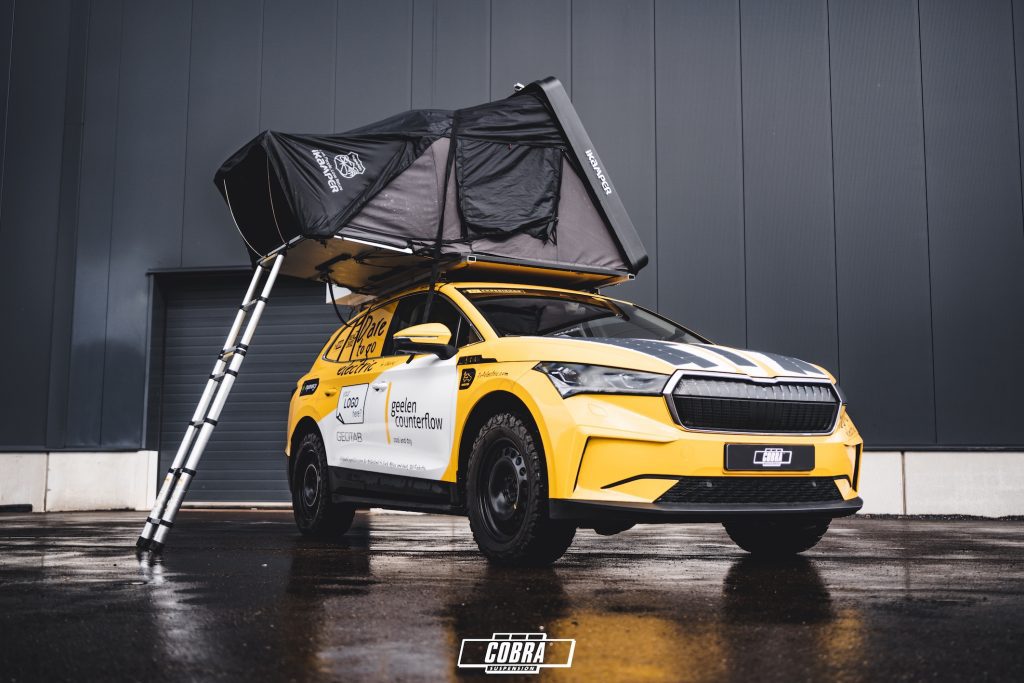 Skoda Auto became partner of our expedition. Such an amazing feeling that a big company like that believed in our idea!
In addition, we found the last partners to make our expedition complete. And therefore we were ready to go.
However, our 12 volt battery died which resulted in many errors in the car. Will we make it in time to depart on the 4th of November?